Educational and scientific activities of the department

The department traditionally holds regional and republican methodological seminars in order to expand the use of innovative technologies in teaching literature and organizing exchange of experience. A regional seminar “Actual problems of teaching literature” ( 2012), the republican seminars “Ancient Turkic writing is a sign of a high civilization” (2013), “Problems of Teaching Philological Disciplines: Innovative and Prospective Directions of Development” (2014), ” Actual problems of teaching literature” (2015), “Kazakh Literature and Teaching Methods” (2015), “Тopical issues of studying historical prose in Kazakh literature” (2016), and collections of materials of all seminars have been published. Teachers of high schools and colleges, teachers of schools and employees of educational institutions participated in these seminars, this is the main part of the career guidance work of the department.

On November 26, 2016, the Republican Scientific and Methodological Seminar “Тopical issues of studying historical prose in Kazakh literature” dedicated to the 25th anniversary of Independence of the Republic of Kazakhstan and the 50th anniversary of the K. Zhubanov ARSU was held. Scientists from the cities of Astana and Almaty, scientists from Aktyubinsk, Atyrau, West Kazakhstan, Mangistau, Almaty, Zhambyl oblasts, professors and teachers of the universities of our city, teachers of colleges and secondary schools, employees of the regional and city departments of education, doctoral students, graduate students, undergraduates, representatives of the mediawere participated. The purpose of the seminar was the introduction of innovative technologies in the teaching of historical works in the university, college and secondary school, the organization of the exchange of experience. As President N.Nazarbayev said: “We need to look into the past to understand the present and see the contours of the future.” Since the historical works describe the events of the past, the President’s thought strengthens the value of historical works. In the course of the seminar, topical issues of teaching art historical works at literature lessons, methods of studying historical works of such prominent writers as IlyasEsenberlin and AbishKekilbaev, innovative teaching technologies and implementation of intersubject communications in the teaching process were considered.

At the same time, the teaching staff of the department conducts reading conferences, literary evenings and meetings with the participation of writers and poets of the region, intellectuals, teachers, students and undergraduates.

Literary and cognitive evening, dedicated to the work of the People’s Writer of Kazakhstan A. Kekilbaev (2016)

The collective monograph “Cognitive-comparative description of linguistic units”, published jointly with the scientist of the Republic of Bashkortostan (RF), is used in the educational process. Co-editors: Isakova SS, Mukhtarullina AR, Sadirova K.К. The volume is 277 s. Aktobe-Ufa, 2015.

The discussion was held at the Republican Training and Methodological Council at KazSPU named after Abay MES RK, published under the stamp and used in the educational process, teaching aids on elective subjects introduced in the content of educational programs in 2016. Among them:

Educational and methodological documentation with trilingual teaching is fully prepared and approved and will be implemented in the specialty “Kazakh language and literature” in the disciplines: “Professional Kazakh” (mandatory component), “General Linguistics”, “Cognitive Linguistics”, “Arabic”.

They are available for students. Among the video lectures there are video recordings of online classes held on 27.11.14 together with the major educational institutions of the Republic, in particular, Aytbenbetova A.K. in the discipline “Bases of language communication” conducted an online lesson on the topic: “Language and the symbol” in the 2nd year of the specialty KILSHNYA together with the 401 group of the specialty Kazakh language and literature in schools with non-Kazakh language of instruction Kazakh State Women’s Pedagogical University.

In order to expand scientific research conducted with the participation of students, problem groups are working at the department:

“Cases of subscription of  the organizations and enterprises’ names in Aktobe according to the requirements of  MS”, supervisor – Makeshova ZH. M;

With a view of studying and disseminations of experience of use of modern pedagogical technologies of training by the chair traditionally are conducted international, republic and in-high school (university) methodical seminars.

The First International Language Festival dedicated to the Day of Languages of the People of the Republic of Kazakhstan was organized; 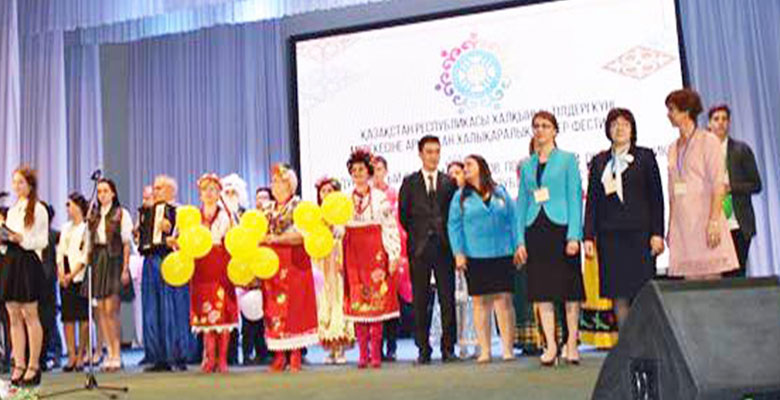 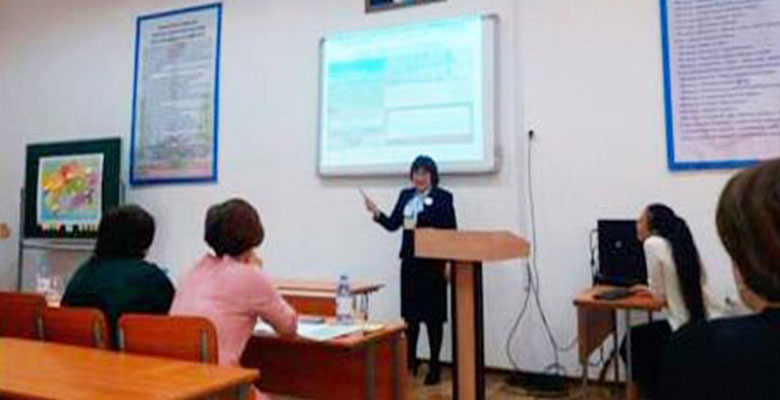 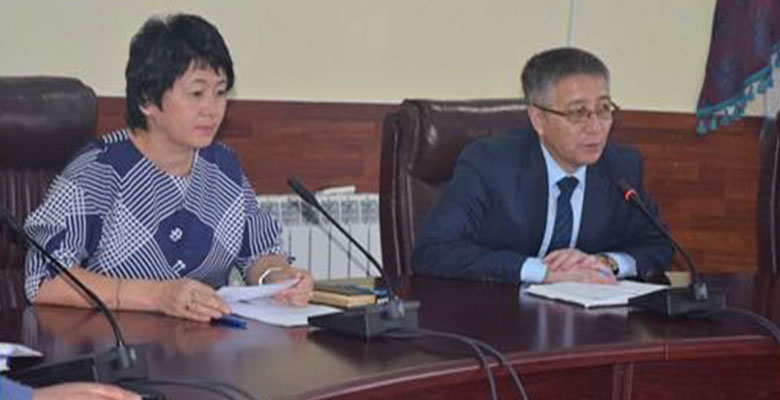 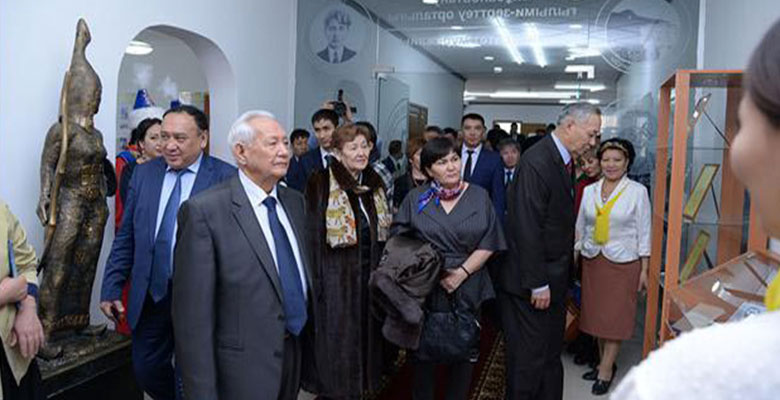 Families and relatives of  Kudaibergen Zhubanov, foreign guests, representatives of intelligentsia, university staff and pupils took part in the opening of the laboratory;

The Scientific Society “Gibrat” has accepted the first year students; 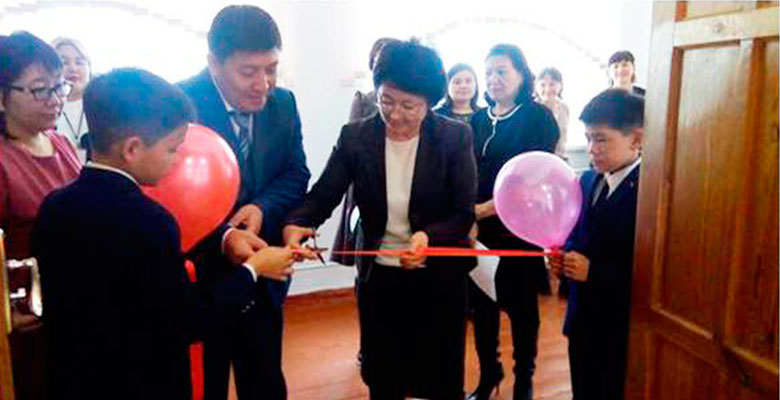 A branch of the Department of Theoretical and Applied Linguistics was opened in secondary school №13 in Aktobe; 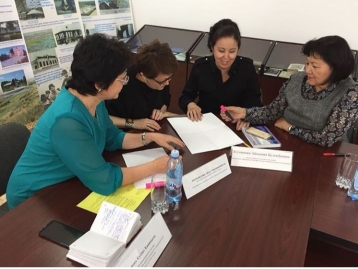 Methodological seminar on ” training of teachers in the framework of updating the content of education”;

Republican and international scientific conferences were held: “Abai World: Issues of Spiritual Heritage and Modernity” (2005); “Personality, scientist, teacher”, dedicated to the 70th birthday of Professor A.Moldakhanov (2006); “Sherniyaz is a people’s poet” (2008); “AktanKereyuly and questions of regional literary criticism” (2010); “SherniyazZharylgasuly and national liberation poetry” (2012); “Literary heritage of poets of the Western region of the XIX century and the beginning of the ХХth century” (2012), “Folklore and national idea” (2016), etc.

On October 19, 2016 in the Aktobe Regional State University named after K.Zhubanov Republican scientific and practical conference “Thegreat personality, an enlightening life” dedicated to the work of the People’s Writer of Kazakhstan AbishKekilbaev with the assistance of the Akimat of the Aktobe region was held. At the official invitation to the conference came the wife of writer Clara Zhumabaeva, daughter SauleKekilbaeva, public and state figures, writers and poets, singers. At the conference were heard speeches of scientists and statesmen A.Aitala, A.Musayev, N.Orazalin, K.Sagadiyev about creativity, about public service AbishKekilbaev. The University opened the “A. KekilbaevAudience”, where you can gather information about the life and work of the writer.

Chairman of the Writers’ Union of Kazakhstan N. Orazalin delivered a speech at the Republiсan scientific-practical conference ” Thegreat personality, an enlightening life” (2016)

On October 20-21, 2016, the International Scientific Conference “Folklore and the National Idea” dedicated to the 50th anniversary of the K. Zhubanov ARGU was held. Scientists from Iran, Turkey, China, Poland, Russia, Kyrgyzstan, from the cities of Astana and Almaty, from Aktyubinsk, Mangistau, Atyrau, West Kazakhstan, Almaty, South Kazakhstan, Zhambyl regions took part in the International Scientific Conference; the teaching staff of the universities of our city, the intelligentsia of the region, representatives of the media, doctoral students, graduate students, undergraduates. The work of the conference was conducted in several scientific areas, addressing the actual problems of folklore, including the national identity and ideological directions of literature and folklore of Turkic peoples, traditions and innovations in contemporary literature and folklore; folklore and questions of linguistic studies, discourse, linguistic poetics, the role of folklore and literature in the education of youth. As indicated in the message of President N.A. Nazarbayev, in order to educate the educated generation, it is necessary to strive to transfer the value of our rich folklore and literature to the young people. Therefore, at the conference “Folklore and the national idea” the idea of ​​”Mangilik El” was considered as a universal goal. At the plenary session of the conference in the speeches of scientists and folklorists, literary scholars from Kazakhstan and Russia: A.M.Moldakhanov, Yu.G.Pykhtina, R.A.Sultangareyeva, A.Sh.Pangereev, G.R.Khusainova the topical issues of folklore, problems concerning the genres of folklore in world literature, including the folklore of Turkic-speaking peoples, were considered. A collection of conference materials was published.

On April 4, 2017, the Kazakh Literature Department jointly with the folklore department of the Institute of History, Language and Literature of the Ufa Science Center of the Russian Academy of Sciences held an online seminar on “Turkic folklore in the aspect of historical study”. At the seminar, topical problems of comparative study of folklore as a source of studying the history of the people were considered. In particular, the images of the rulers in the folklore of the Kazakh and Bashkir peoples, the artistic image in the folklore of the auxiliary branches of the traditional economy, such as hunting, fishing, gathering, beekeeping and the transformation of mythological motifs in the world epics, etc. Presentations were made by Professor B.T.Borash (Kazakhstan), Professor R.A. Sultangareyeva (Russian Federation), Professor B.A. Aznabaev (Russian Federation), Ph.D., Assoc. prof. M.R. Baltymova (Kazakhstan), Ph.D. G.R. Khusainova (Russian Federation), Ph.D. I.I. Spivak-Lavrova (Kazakhstan), E.V. Ph.D. Migranova (Russian Federation), etc. Participants received certificates signed by the first leaders of both sides. The materials of the online seminar were published in scientific journals of Russia and Kazakhstan.
2018, 19 October in the framework of the program” Rukhanizhanyru”took place the international scientific-practical conference” creativity UtezhanNurgaliyev: the literary Genesis and the realities of the era”, dedicated to the 80th anniversary of prominent poet UtezhanNurgaliyev. The plenary session of the conference, held in the Palace of students, was attended by writers and scientists from Astana and Almaty, other regions of the country and foreign countries, relatives of the poet, representatives of Aktobe intellectuals and students. During the event the audience was presented the book, dedicated to this anniversary: the First book “Utezhan”, is a collection of articles and memoirs about the poet Otezhan, as well as interviews of the poet in journals; the second book “Syimaiketkenkalypka”, which contains poems dedicated to the poet Utezhan. 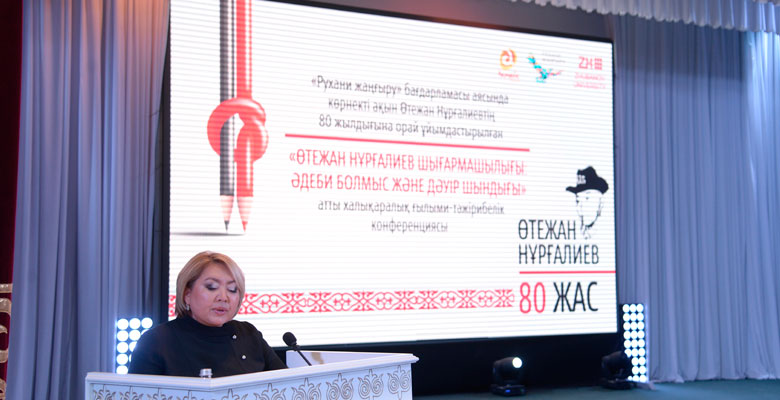 International scientific-practical conference “Creativity of Otecan Nurgaliyev: life in literature and the truth of the era” (19.10.2018)

The Vice-Minister of the Ministry of Education and Science of the Republic of Kazakhstan Elmira Sukhanberdiyeva read out a congratulatory letter from Minister Yerlan Sagadiyev. 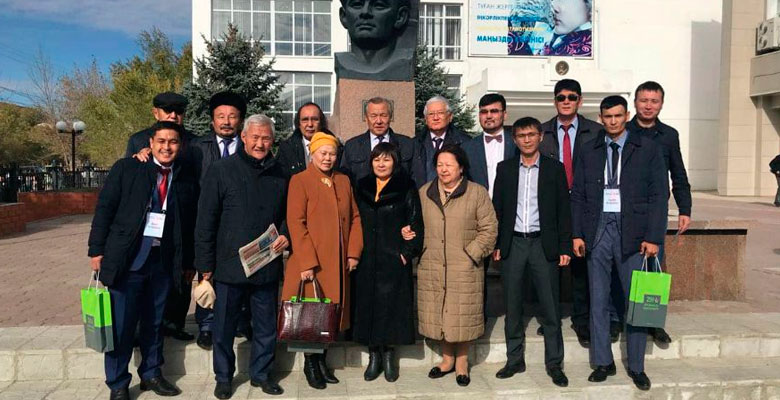 Then the conference ” Modern Kazakh lyrics and Utezhan Nurgaliev”, ” Problems of worldview and spirituality in the work of Nurgaliev” and others as part of the anniversary, were also the results of the Republican marathon of poetry “Utezhan-gumyr”, the regional contest of reciters “Utezhan okulary” relay of videopoetry “Utezhan olenderi” and the Republican poetry of the anniversary.

On the 80th anniversary of  Utezhan Nurgaliyev, In the academic building №6 on the street GrishinaAktobe regional state University after named Zhubanov opened meeting room name bard. And the building was named after Nurpeis Baiganin. 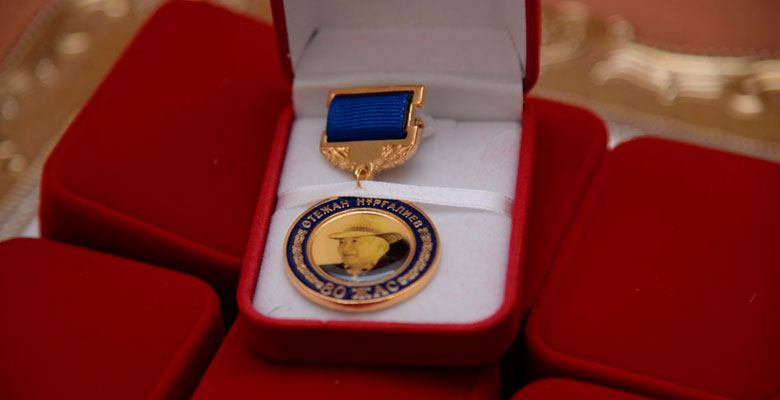 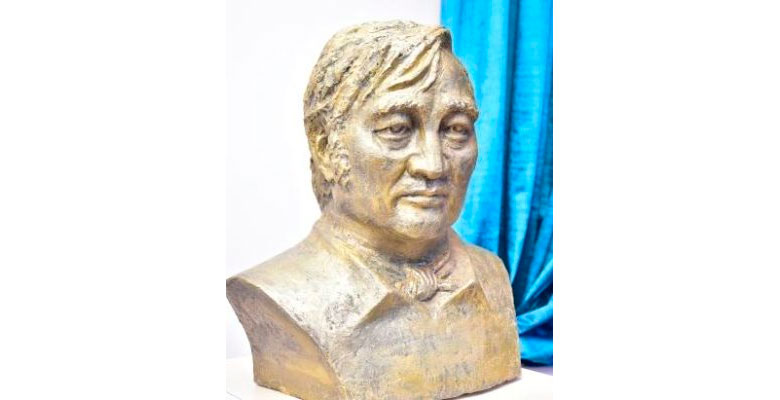 Bust of Otezhan Nurgaliyev, prepared for the anniversary of the poet 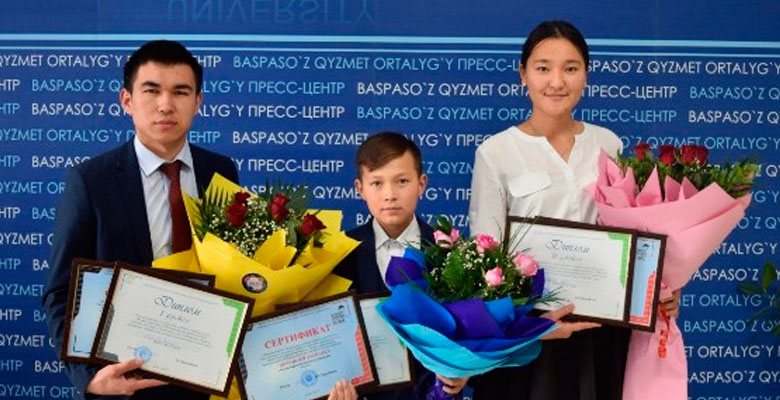 2018, November 9 in the framework of the program ” Rukhani zhangyru” literary scholar, doctor of Philology, Professor Musaev A. M. was held Republican scientific and practical conference”literary science: traditions and continuity” in celebration of the 70th anniversary. 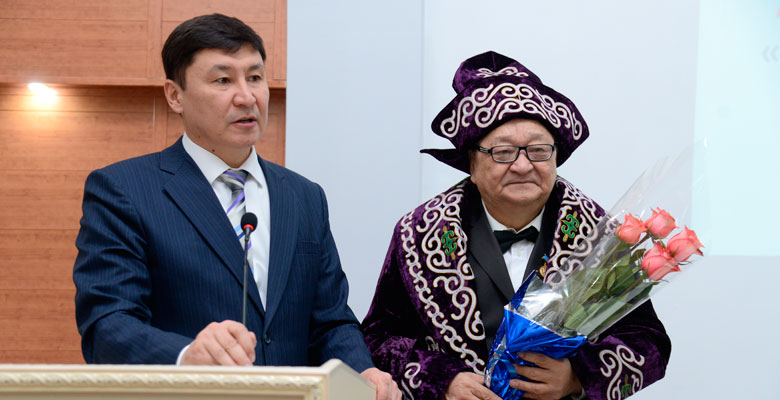 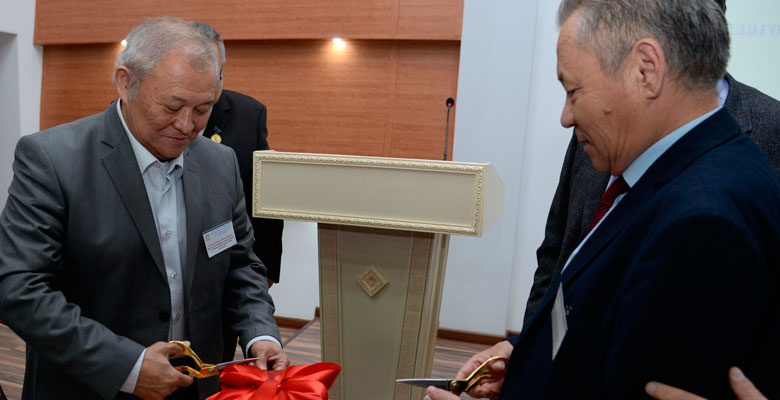 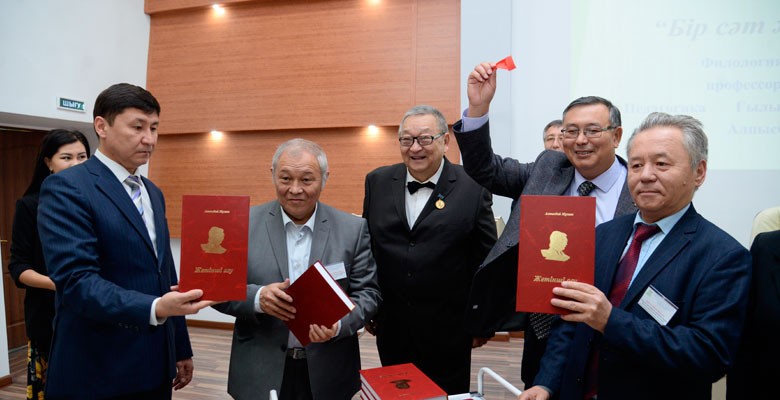 2019, 25 January  was held the international scientific-practical conference “literary and spiritual heritage: in the context of intercultural communication”, devoted to the 60th anniversary of the scientist-folklorist, doctor of Philology, Professor AbatShamovichPangereev,  in the framework of the program “Rukhanizhangyru” in Aktobe regional state University after Zhubanov. 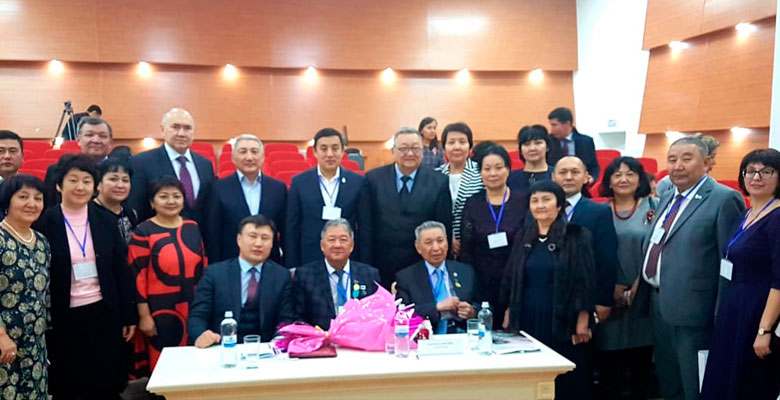 Teaching staff of the faculty were invited to lecture at the following foreign universities: